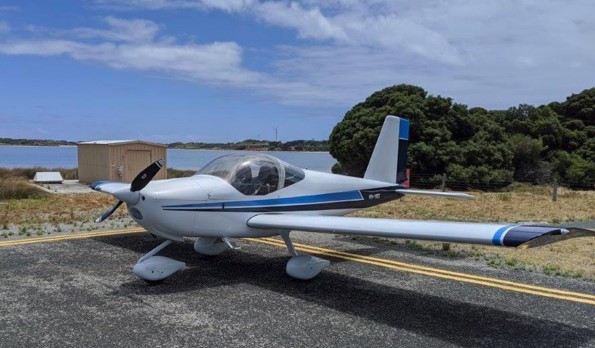 I was quite a latecomer to flying but have had a lifelong interest in aviation ever since my earliest memories of watching birds soaring over our house when very young and reading my first Biggles book at the age of about eight – `The Cruise of the Condor’. That memorable story was followed by many more Biggles adventures, books about aircraft and famous aviators, and quite a few control-line model aircraft.  At the age of 16, I entered a competition run by the Wimmera District Aero Clubs in Victoria to win a flying training scholarship.  I placed in the top 14 out of 280 applicants and earned a second trial flight with the chief instructor, but unfortunately didn’t win.

Life subsequently went on through the years without much thought of ever learning to fly, until at the age of 58 my wife bought me a three-lesson gift pack from RACWA at Jandakot as a Christmas present. I enjoyed the experience, wondered what to do next, so bought three more lessons and kept going, passing my GFPT test with John Douglas some months later.  Somewhere along the way I also discovered the fascinating world of homebuilt aircraft and began to wonder what it would be like to build one.

Then in early 2009, the year I started learning to fly, Vans introduced the RV-12, a Light Sport Aircraft. It wasn’t as fast as the other RV’s but the kit was complete with engine, avionics, wiring looms – everything except fluids and paint, according to Vans.  Importantly, it could be also flown by RAAus pilots, which opened up options for future sale or perhaps another way to keep flying if medical issues should ever make maintaining a Class 2 problematic. It was a modern design, very well equipped, fast enough to easily outrun the average Cessna, and had the legendary RV label and pedigree.

As I worked towards my PPL, apart from the fun and challenge of building an aircraft it would also solve the problem of flying regularly in the future. Having to hire training aircraft was both inconvenient and expensive, and would make long trips almost impractical. Although it was a big financial commitment, my wife thought building was a good idea. The result was that the first three crates full of aircraft parts arrived on the same day in 2010 that I got my PPL. That was a good day!

Several years and some 1,700 hours later VH-YRT was ready to leave its two-car converted carport workshop for Serpentine and make its first flight. AP Colin Morrow signed it off and JB (John Barker) agreed to be the test pilot. It took to the air on 3 May 2015, watched by a small crowd of SABC members, including Rob Montgomery whose RV-7A also had its first flight on that blustery afternoon.

At the time of writing, VH-YRT has flown about 210 hours including a return trip to visit my parents in Victoria in 2016, and a memorable trek in 2018 through the outback, including Esperance, the Nullarbor and Bight, Maralinga, Coober Pedy, Uluru, the Olgas, MacDonnell Ranges, Devils Marbles, Tindal, Kununurra, Lake Argyle, the Bungle Bungles, Wolfe Creek Crater, Halls Creek, and back over Fitzroy Crossing, Sandfire Roadhouse, Karijini, Paraburdoo, Meekatharra and Northam.

My aircraft is a standard Dynon Skyview equipped RV-12 with autopilot and lights, but the fuel tank capacity has been increased to better suit our long distances (with Col’s oversight of the redesign).  It has certainly been everything I could have wished for in terms of a building experience, flying aircraft, and introduction to many new friends in the unique world of aviation.